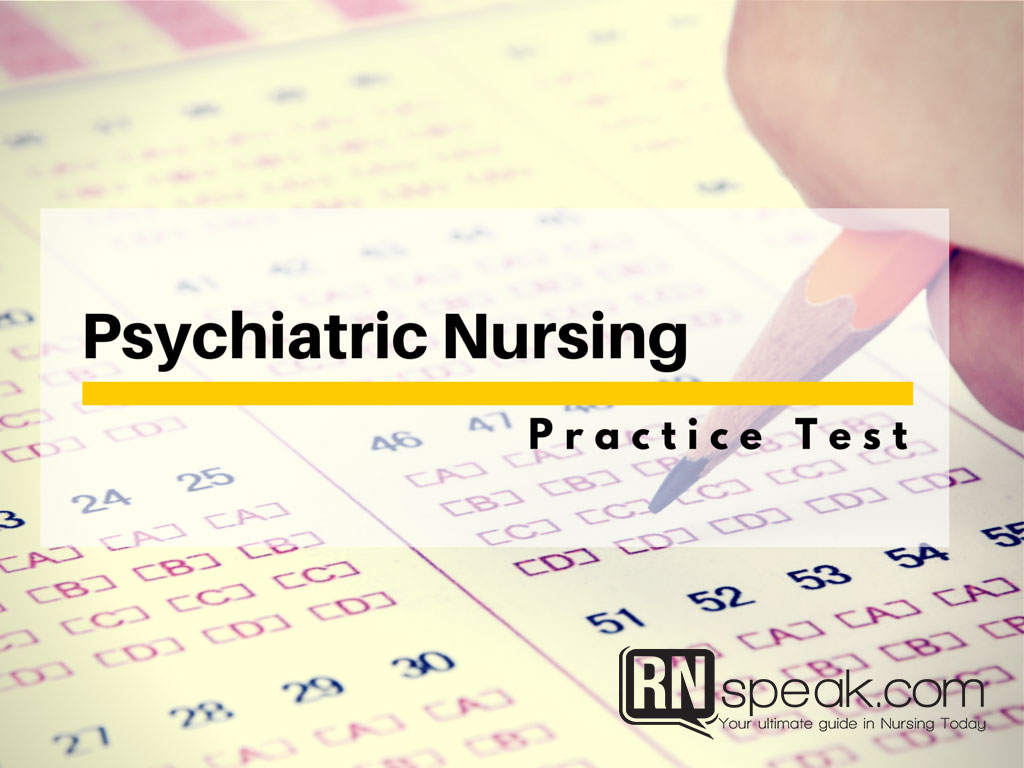 This is a multiple choice type of examination. Choose the BEST answer. Read the questions carefully before answering it.

1.Ben is assigned in a psychiatric ward; he notices that one of the patients would follow every move he would make. When he moves his hand, the patient would also move his hand. This is:

2.During an interview, Rona notices that the client’s response is similar to what she says. This is:

3.Andy would like to visit her cousin in the psychiatric ward. An inspection was done before she enters the facility. What will not be allowed?

4.While making rounds, Mary noticed one of her clients saying the following line: “I have money, want to study. Daddy wants honey, honey honey bee…This is an example of?

5.Ana approached a client and asked “Hi, Mr. Chase how’s your day? Mr. Chase: “This is a wonderful ……” (No response was heard after. This is:

7.Britney said to her nurse one day, “You know what, that medication nurse would always give medicines in a cup. Don’t you know that the cup contains the blood of a sacrificed animal? She wants us to drink it. Can you help me stop her?”

8.“I am the heir of the Ayala land, they only taken it away from my father.” Claimed by a patient in the psychiatric ward, this is an example of:

9.A person seeing a design on the floor thought it was a fossil, this is an example of:

10.“That man wants to kill me, he keeps on stalking me for almost three months now.” This is:

11.Client: “Have you seen that big cloud? Sun goku leaves there. An alien copies the identity of Sun goku in order to conquer the earth” This is an example of:

12.“I have heard my mother say I will not take this medication.” It was found out that Josh’s mother was already dead 10 years ago. This is an example of:

13.During the impeachment trial, a client happened to watch one of the episodes of the senate hearing. The client shouted: “They are asking me to tell the truth. They are looking for me now.”

This is an example of:

14.Bryan is a nurse assigned in a psychiatric ward; he takes note that the most common type of hallucination is:

15.A patient with bipolar disorder says: “I am so happy, daddy, nappy…” This is an example of

16.Which of the following is an appropriate nursing action to a patient with a delusion?

17.Which of the following is a therapeutic technique of communication?

a. Challenging him or his beliefs
b. Being in the defensive side
c. Trying to talk to the patient into accepting a therapy or treatment
d. Using questions that are answerable by an explanation

18.The client vents out the following statement: “I am very upset with what happened to my wife. She left me without saying anything. I am nothing now.” Which statement describes validating as a response from a nurse?

a. “Maybe she left you because you were drinking too much.”
b. “Don’t’ worry she will realize how much she loved you and will come back.”
c. “You’re telling me that you were very sad because of your wife leaving, isn’t it?”
d. “She was wrong in leaving you.”

19.As a nurse you will know if the person has mood disorder if:

a. Has a flight of ideas
b. Has flat affect
c. Has a paranoia
d. Has an illusion

20.Schizophrenia has been a focus of psychologists for many years. Aside from brain abnormality formation theory, which of the following could not pose a possible cause of this illness?

Situation for No. 21-23. Anna is assigned in a high school department as a school nurse. She encountered different cases of eating disorders.

21.The following are signs of anorexia nervosa, except:

22.Anna observed Rina as a beautiful student however when it comes to making friends she is so shy. She approached her and observed that her skin is dry, and asked her to weigh herself. She joyfully responded: “I always take my weight every morning. It does not go above 30 kilos. Rina is a 15 year-old high school student and a prima ballerina in her class. Upon opening her file you have found out that she is a diagnosed anorexic, what is the most serious complication of anorexia nervosa?

23.In a bulimic patient, why there is purging when after the patient binges?

24.In the emergency room department a patient was rushed with a dramatic tremor of extremities. Upon assessing his consciousness, he has been very curious and talkative about the procedures. He claimed: “I have not sleep these days.” Further assessment revealed that he consumes 3-4 bottles of whiskey every day. What is your appropriate nursing intervention during acute alcohol intoxication?

a. Isolate the patient
b. Secure side rails
c. Give diazepam 2.5mg per IV
d. Restrain the patient

25.In working with the patient, when is the best time to prepare the patient for the termination phase?