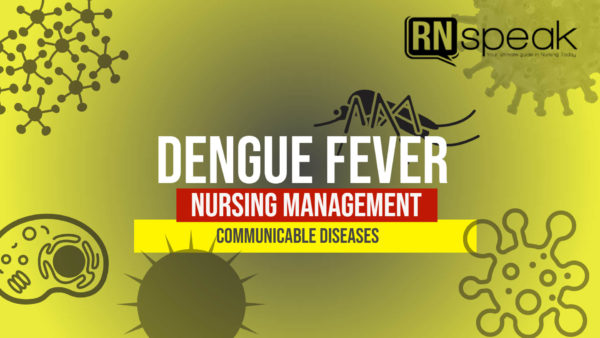 Summer season has now lapsed and rainy days are setting in the Philippines as a tropical country is included to the Center for Disease Control and Prevention list for one which has dengue outbreaks for the past years.  According to the statistics, there were 126,000 dengue cases in the country last 2011. Thus, recently the Department of Health (DOH) strictly encourages the public citizens to continue and strengthen their fight against dengue. Today, the goal of the DOH according to Dr. Eric Tayag is to decrease the number of dengue cases to at least 100,000 cases comparative to last year’s figures.

There was a slight gist of hope for all since DOH has reported an 8.52% decline in dengue cases last January 1 to May 5 of this year; compared to the growth of cases last year on the same said period. Nevertheless, we should not be at ease of this since the peak season of dengue fever is still somewhere between the months of July and August. So, here are the things we should know about dengue hemorrhagic fever and its corresponding nursing care management.

Dengue hemorrhagic fever is caused by a bite of a vector mosquito called, Aedes Aegypti. This mosquito is considered to be a day- biting and low flying mosquito and commonly be found inside the household. On the other hand, some reports initiated by a study in the UP Los Banos had produced another suspicious mosquito to be a dengue carrier- known as Aedes Albopictus. This time, this said mosquito is a night biting mosquito and can be found spreading the virus in the outdoors.  DOH is however unsure if this specie of Aedes mosquito is the one responsible for the cases of dengue nowadays.

The etiologic agents carried by the vector mosquito include Dengue Virus Types 1, 2, 3, 4, and Chikungunya virus. The condition causes an acute febrile infection with sudden onset that could be manifested in three stages: 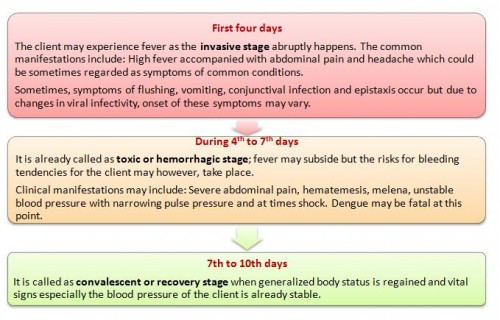 It is sporadic throughout the year according to statistics and becomes epidemic during the months of June to November.

Classification of Dengue Hemorrhagic Fever: (Depending on Severity)

The Four S drive implemented by the Department of Health corresponds to:

It may also involve frequent changing of water and scrubbing sides of vases and keeping water containers covered at all times, destroying of breeding places stated above by cleaning the surroundings (3 O’clock habit) and proper disposal of tires and containers.

Supportive management which could be symptomatic in nature may involve:

Health education on the prevention of hemorrhage may include:

In cases that hemorrhage sets in, nursing care may involve the following: