Nurses operate daily, keeping efficiency intact and safety as the highest priority at all costs. With the help of Maslow’s hierarchy of needs, they alleviate their clients’ optimum health through effective Management of interventions.

Learn how Maslow had presented all of these needs with a straightforward way to understand them through a pyramid. 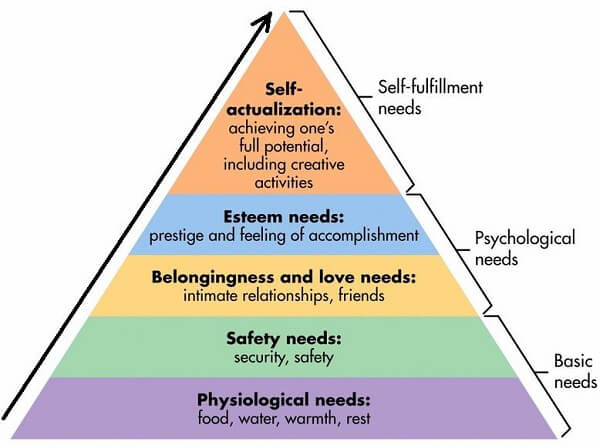 5 Levels of Maslow’s Hierarchy of Needs

In the clinical setting, having a support group and getting hold of the same people who had the same experiences, such as AA or Alcoholics Anonymous and Drug Rehabilitation Centers, are means to satisfy these needs.

1. Esteem needs to be met on their own

2. Esteem needs to be met by others

Example: Reputation, promotion, being seen as an inspiration, and becoming an influence

These needs and the first three levels complete the Deficiency Needs.

Note: This is the only set of needs that belong to Being Needs, also known as the B-Needs.

The grand difference can be derived from their names. Deficiency Needs (D-Needs) that fall from Level 1 to 4 arise when a deficiency is felt. The need for protection addresses the lack of resources. And the more they get satisfied, the lesser the demand, the lesser they become needs.

Compared to the Being Needs (B-Needs), whose main focus is self-actualization, these needs pertain to a person’s drive to reach something bigger than oneself. It resides on top of the pyramid’s summit representing the highest achievement a person can be defined with. These needs are all about becoming the most one can be, reaching the utmost potential that they have. And this includes the creative aspect. What’s remarkable about it is how it opposes the D-Needs.

While D-Needs emerge from a lack of being needs, they arise from having it satisfied in the first place. To put it in perspective, the more you attend to the B-Needs, the more the demand for it grows. Owning a patent, earning a PhD, and even as simple as writing and having a book published are forms of Being Needs getting satisfied. Being Needs is also known as Growth Needs.

Wants – things a person long to have; often what you wish for

Example:  Car, a diamond ring, a mansion, a million dollars

Needs – are necessary wants; usually prioritized according to a person’s survival

instinct; needs to be prioritized

What is the essence of a pyramid in the hierarchy’s arrangement?

The shapes and directions the pyramid represents.

How is Maslow’s Hierarchy of Needs Helpful?

1. It serves as a basis for all business models in which success is always one of the strongest pursuits. What many do not know was that Maslow, in the very last days of his long life, longed for more businesses to consider offering products that lead people into fulfilling self-actualization rather than paying attention only to the basic ones.

2. It provides an ideal life structure for many people who seek direction on how to fulfill their purpose.

3. It is the basis of medical and nursing applications acknowledging both physiological and psychological needs.

4. Maslow’s Hierarchy of Needs served as the basis for nursing care plans. The decision-making and prioritization processes for critical Management and bedside care follow the hierarchy faithfully. Though in consideration of the other prioritization models such as ABC (airway, breathing, circulation) and other psychological theories, Abraham Maslow’s seem to be the most applicable until today.

Application of Maslow’s Hierarchy of Needs to Modern Nursing

A nurse had been regarded as more than just a giver of health care because, besides her knowledge in medicine, she has high regard for benevolence in providing care for her patients to the best of her ability. And one of every nurses’ important tasks is to look after their welfare, attending to both physiological and psychological needs.

As Maslow conceptualized this hierarchy of needs, it had been in every nurses’ toolbox to be regarded as the proper guide in conducting a physical assessment, attending to emergency care, and planning nursing interventions while regarding prioritization and optimum health.

Nurses consider this in pain management as well, in which only the patient’s subjective interpretation is the only basis for how extensive the treatment should be adjusted. Considering the hierarchy of needs by Maslow as the backbone of patient care priorities, Management had improved remarkably. It is the only guide that addresses self-actualization, which may be attained at different levels.

It could be as simple as autonomy, independence, and an increased range of motion after a great trauma or surgery. All of which alleviates a person’s depressive state into embracing drive, a positive mindset, and willingness. So, this way, both physiological and psychological aspect’s needs are met.

All in the same way, nurses are helped themselves as they give patient care. Often, nurses face a lack of workforce that they had to attend to more than 8 patients per shift. But as Maslow’s Hierarchy of Needs gives them enlightenment in prioritization, nurses plan better, allowing them to manage their time for their work while imparting quality care.

They realize the consequence of not eating on time, not having adequate rest, and how exhaustion could affect a person’s ability to do tasks. So, they make sure they find time to get some relaxation and socialization when they can without feeling guilty, nervous, or exhausted.

Maslow had been aiding all nurses in doing their jobs efficiently. It provides overall clarity in each intervention they perform and each patient care they provide.

10 Best Practices on How to Produce an Accurate Nursing Documentation

Florence Nightingale – The Woman Behind the May 12 Celebration