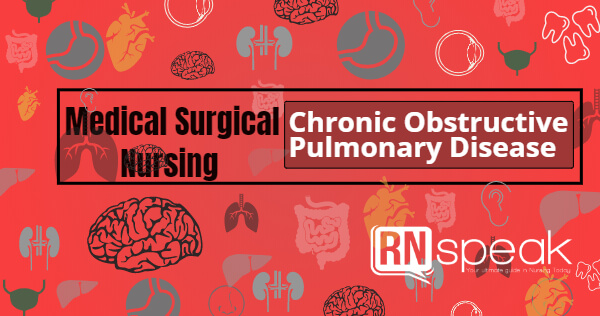 COPD is a disease of increasing public health importance around the world. COPD has emerged as the third leading cause of chronic morbidity and mortality worldwide. The disease is expected to worsen as the population ages and the worldwide use of tobacco products increases.

This article discusses the causes, clinical features, current approach to diagnosis and management, and nursing management.

COPD is the third leading cause of death and affects more than 10 million persons in the United States. It is a common, preventable, and treatable disease characterized by persistent respiratory symptoms and airflow limitation due to airway and alveolar abnormalities, usually caused by significant exposure to noxious particles or gases.

COPD is characterized by chronic inflammation of the airways, lung parenchyma (respiratory bronchioles and alveoli), and pulmonary blood vessels.The pathogenesis of this chronic, irreversible disease is complex and involves many mechanisms.

Excess mucus production:  Chronic productive cough is a feature of COPD with predominant chronic bronchitis. Excess mucus production is the result of the increased number of mucus-secreting goblet cells and enlarged submucosal glands. Some of the inflammatory mediators also stimulate mucus production. In addition to this, cigarette smoke-induced loss of cilia also causes decreased mucous clearance and chronic cough.

Parenchymal destruction: Inhalation of oxidants present in tobacco or air pollution causes increased activity of proteases (which break down the connective tissue of the lungs) and inhibits the antiproteases (which protect against the breakdown). The natural balance of protease/antiprotease is thus altered and results in the destruction of the alveoli and loss of the lungs’ elastic recoil.

Peripheral airway remodeling: The hallmark feature of COPD is airflow limitation during forced exhalation. The primary site of airflow limitation is in the smaller airways. As the peripheral airways become obstructed, the air is progressively trapped during expiration. Because of air trapping, the chest hyper expands and becomes barrel-shaped. The functional residual capacity is increased.

Ventilation-perfusion (V/Q) mismatch: Continued air trapping causes destruction of alveolar walls, and bullae (large air spaces in the parenchyma) and blebs (air spaces adjacent to pleurae) can form. Bullae and blebs are not effective in gas exchange, as they do not contain the capillary bed that normally surrounds each alveolus. This results in a significant ventilation-perfusion (V/Q) mismatch and hypoxemia. Peripheral airway obstruction also results in V/Q imbalance and, combined with respiratory muscle impairment, can lead to CO2 retention, particularly in severe disease.

Pulmonary vascular changes and impaired cardiac performance: Pulmonary vascular changes may occur late in the course of COPD. The small pulmonary arteries vasoconstriction due to hypoxia. As the disease advances, the structure of the pulmonary arteries changes, resulting in the thickening of the vascular smooth muscle. Because of the loss of alveolar walls and the capillaries surrounding them, pressure in the pulmonary circulation increases resulting in mild to moderate pulmonary hypertension. Pulmonary hypertension may progress and lead to hypertrophy of the right ventricle of the heart (cor pulmonale) and may eventually lead to right-sided heart failure.

Systemic effects: Chronic abnormal inflammatory process is an underlying etiology for these systemic effects. Cardiovascular diseases commonly exist in COPD (smoking is a primary risk factor for both of them). Other common systemic diseases include cachexia (skeletal muscle wasting), osteoporosis, diabetes, and metabolic syndrome.

Symptoms include the following:

Cough: Productive cough is a common symptom (usually worse in the mornings and produces a small amount of colorless sputum).

Breathlessness: is the most significant symptom. When FEV1 falls to 50% of predicted, the patient becomes breathless upon minimal exertion.

Wheezing: may occur in some patients, particularly during exertion and exacerbations.

Patients with advanced disease may experience tachypnea and respiratory distress with simple activities.

An FEV1/FVC ratio of less than 70% establishes the diagnosis of COPD, and the severity of obstruction (as indicated by FEV1) determines the stage of COPD. COPD can be classified as mild, moderate, severe, and very severe.

Arterial blood gas (ABG) analysis: helps to assess the acuteness and severity of disease exacerbation. Mild COPD patients may have mild to moderate hypoxemia without hypercapnia. As the disease condition progresses, hypoxemia worsens and hypercapnia may develop. In chronic CO2 retainers, renal compensation occurs and thus, pH usually is near normal. Any pH below 7.3 may be a sign of acute respiratory compromise.

Alpha1-Antitrypsin: AAT should be measured in all patients younger than 40 years, in those with a family history of emphysema at an early age, or patients with emphysematous changes with no smoking history.

Sputum evaluation and sputum culture: An increase in the quantity of sputum production and the presence of neutrophils is often a sign of an acute exacerbation. The pathogens cultured most frequently during exacerbations are Streptococcus pneumonia, Haemophilus influenzae and Pseudomonas aeruginosa.

B-Type Natriuretic Peptide: By measuring BNP, CHF and COPD exacerbations can be differentiated.

Computed Tomography: High-resolution CT is more sensitive than standard chest radiography and is highly specific for diagnosing emphysema (outlined bullae are not always visible on a chest radiograph).

Six-Minute Walking Distance: The distance walked in 6 minutes (6MWD) is a good predictor of mortality in patients with moderate COPD. Patients who desaturate during the 6MWD have a higher mortality rate than do those who do not desaturate.

BODE index: The BODE index is a multidimensional scoring system used to test patients who have been diagnosed with COPD and to predict mortality. The index uses the four factors to predict risk of death from the disease – Body-mass index, airflow Obstruction, Dyspnea, and Exercise capacity.

The BODE index will result in a score of zero to ten dependent upon FEV1, body-mass index, the distance walked in six minutes, and the modified MRC dyspnea scale. Greater score means higher probability the patient will die from COPD.

The goal of COPD management is to improve a patient’s functional status and quality of life by preserving optimal lung function, improving symptoms, and preventing the recurrence of exacerbations.

Smoking Cessation: Cessation of cigarette smoking is the most important intervention that can impact the natural history of COPD.

Drug Therapy: Drugs are given in a stepwise fashion according to the severity of airflow obstruction.

Breathing Retraining: The main types of breathing retraining exercises are:

Nutritional Therapy: Many COPD patients in the advanced stages are underweight with loss of muscle mass and cachexia. Weight loss is a predictor of a poor prognosis and increased frequency of COPD exacerbations. Nutritional support is an important part of comprehensive care in patients with COPD.

Nursing assessment should include the following

The overall goals are that the patient with COPD will have:

Desired Outcome: Following treatment/intervention, the patient’s breathing pattern improves as evidenced by reduction in or absence of reported dyspnea and related symptoms.

Desired Outcomes: Optimally within 1-2 hr following treatment/intervention or by discharge, the patient has adequate gas exchange as evidenced by respiratory rate (RR) of 12-20 breaths/min and normal/improved ABG values.

Desired Outcome: The patient reports decreasing dyspnea during activity or exercise and rates perceived exertion at 3 or less on a 0-10 scale.

In this phase the effectiveness of nursing care to meet the set goals are evaluated. An effective nursing care plan will help the client with COPD to achieve the goals and the patient