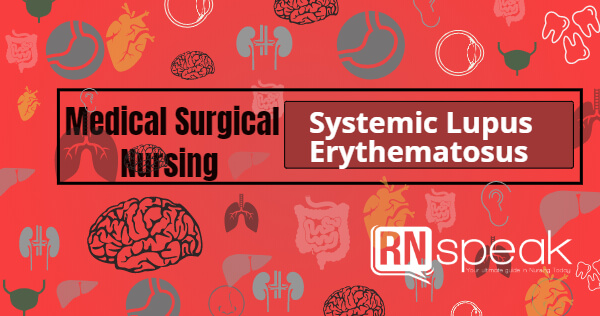 Systemic lupus erythematosus (SLE) is a type of autoimmune disease where the body’s own immune system attacks the healthy tissues by mistake. Lupus means ‘wolflike’ describing the distinctive rash over the cheeks and bridge of the nose appearing in most patients.

The exaggerated auto-antibody production in SLE is caused by the abnormality of the suppressor T-cell function. When these cells are destroyed, immune complex deposition takes place ensuring damage to the tissues. When tissue damage takes place, inflammation occurs which triggers antigens. These antigens are responsible for stimulating additional antibodies that attack normal, healthy cells.

Although the exact cause of SLE is not fully known, the disturbance in the immune regulation of the body is brought about by the combination of factors:

Because of the hormonal factor, SLE is considered to be more common among women. It may appear at any age, but most occurrences took place between ages 10 and 50.

The Occurrence of symptoms from one SLE patient to another vary. People remain undiagnosed for a long period of time if the onset occurs slowly. For others, it may appear suddenly or mildly. In most cases, patients with lupus have mild disease characterized by ‘disease activity’ otherwise known as ‘flares.’ It is during this time the symptoms get worse and after a while improves or completely disappear for a period of time.

Most common symptoms of SLE are:

As enumerated above, the clinical manifestations of SLE involve more than one body system only. Other symptoms depend on which body system is affected.

Arthralgia and arthritis or synovitis are the common presenting features of SLE. In addition, joint swelling, tenderness and pain when moving are commonly experienced by patients, accompanied by morning stiffness.

The most common skin manifestation which occurs in about 50% of SLE patients is the presence of butterfly-shaped rash in the bridge of the nose and cheeks. Types of clinical manifestations may include subacute cutaneous lupus erythematosus (SCLE) and discoid lupus erythematosus (DLE). Often, these lesions worsen during exacerbation of the disease which is triggered by sunlight or artificial ultraviolet light. The initial skin involvement in some cases leads to the involvement of other body systems.

The presence of oral ulcers in the hard palate may occur too. Often occurring in crops, their presence is linked to the exacerbations which goes with skin lesions.

Pericarditis (inflammation of the pericardium) is present in about 30% of the patients. Cardiac manifestation may be asymptomatic and often is accompanied by pleural effusions. The involvement of lungs and pleura occurs at about 20% to 40% in affected individuals.

About 50% of SLE patients have lymphadenopathy. During the course of illness, about 32% of patients develop kidney damage. This is caused by the damage of the kidney’s glomeruli. The kidney damage in SLE is reversible.

Generally, patients affected with this illness develop changes in their behavior and cognitive ability. They frequently develop depression and psychosis too.

SLE is diagnosed by conducting a complete history and a series of blood tests. Diagnosis is made easier because of the fact that every SLE patient is positive for antinuclear antibodies (ANAs). Presence of ANAs is detected through the immunofluorescence test. The basis for the diagnosis of SLE is the presence of four (4) or more criteria together. The 11 criteria for the diagnosis of SLE are detailed on the chart below:

The management of SLE depends on the clinical onset of the illness – acute and chronic. Interventions for the acute disease are focused on controlling the progressing disease activity or the exacerbations which may involve multiple systems of the body.  Disease activity (flares) is composed of clinical and laboratory features reflecting the presence of active inflammation due to SLE. If the condition is chronic, periodic monitoring is involved. Changes in the clinical manifestations should be recognized in the course of treatment, to assess disease activity (flares), evaluate the effectiveness of therapy, and adjust the management given to patients. Educating the patient about the condition is important too.

Goals of SLE treatment is focused on the following:

Drug therapy for SLE is focused on treating local inflammation which is caused by the exaggerated immune response. The medication is given and dosage varies from patient to patient. NSAIDs are administered for minor clinical manifestations. Frequently NSAIDs are given with corticosteroids.

To manage skin, musculoskeletal, and mild clinical features of SLE effectively, antimalarial drugs are given. Immunosuppressants are administered because of their effect on the immune function. However, these are only given for patients with serious SLE conditions and for those who have not responded to conservative therapies.

© 2021 RNspeak.com. All rights reserved.
We use cookies to ensure that we give you the best experience on our website. If you continue to use this site we will assume that you are happy with it.OkPrivacy policy