“I think one’s feelings waste themselves in words; they ought all to be distilled into actions which bring results.” 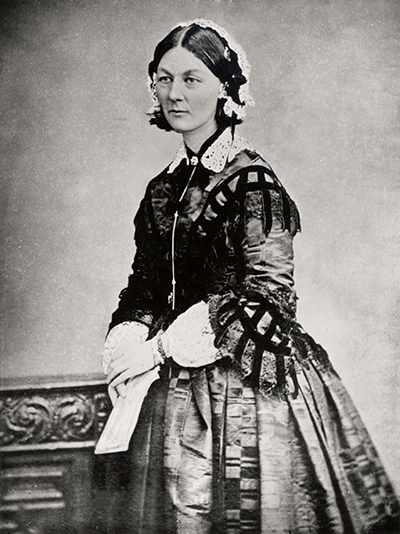 Let’s take a closer look to the life of the mother of modern nursing.

Who is Florence Nightingale?

When we were yet student nurses, we study about the life of Florence, her theories, and her writings.

I attribute my success to this – I never gave or took any excuse.

Florence Nightingale was born in Florence, Italy, on May 12, 1820. Their family was known to be elite and for that reason she was bestowed a decent education.

She has also mastery of different subjects including religion, literature, political science, philosophy, music, arts, mathematics, science and even history. In short, she is a linguist.

During the Crimean War, she and a team of nurses improved the unsanitary conditions at a British base hospital, reducing the death count by two-thirds. They arrived at the war on November 5, 1854 together with her recruited nurses who before were just plain housewives, nuns, and other volunteers without medical background.

Arriving at the hospital, Nightingale and her companions were stunned with the conditions of the soldiers. The environment of the hospital was very unsanitary and it was even infested with vermin and pests. Nightingale knew that she had to change the system of the hospital. She asked helped to the government to provide food, clean linens, and medical supply for the soldiers. She even use her own finances for the expenses.

In short, she managed the hospital superbly and provided an environment suitable for every injured solider to survive.

The world of nursing recognizes her contributions to the art of nursing and how she catered the soldiers during the Crimean war with compassion and dedication.

But for me, Florence Nightingale was more than just a nurse. She was a woman called by God.

A woman called to serve—-I believe that Nightingale was purposely called by God to heal the suffering of His people. Nightingale said No one in certain terms that my life belongs to God. That He had work for me to do. Yes Lord! Let me think of thy will. Let me serve you, you alone.

But what are the good qualities of Florence Nightingale as an individual?

A woman of dedication to serve humanity—–I attribute my success to this – I never gave or took any excuse. This is a famous quote by Nightingale. Her words were reflection of dedication and selfless service to humanity. Despite of all the discouragements of her parents, the condescending behavior of physicians towards nurses, and the demeaning perception of society towards the nursing perception but still she never wavered down, bowing to the standards of selfish men.

A brave spirited person—–How very little can be done under the spirit of fear. Though she was young in age, however she was brave enough to face the queen, to address the concerns of the hospitals, and to tread the path less traveled by people.

A generous heart and has a soul for the poor—–Florence Nightingale came from an elite family. William Shore Nightingale was a wealthy landowner and her mother Frances Nightingale, hailed from a family of merchants and took pride in socializing with people of prominent social standing.

Nightingale once said: My only struggle is how to escape to a life poisoning me with vanity and social expectations. Indeed, she was raised with a silver spoon in her mouth yet she was contented with her comfortable life. She moved out from her comfort zone and pursued her calling from God.

What are her weaknesses as a human?

The fact that she is human, capable of human emotions and vulnerable to the attacks to the mortal world, Florence Nightingale had also shown her weaknesses.

Her physical strength was compromised—-Florence Nightingale also got ill due to the stress, tiresome labor, and constant thought of how to improve their nursing care. She was not able to take care of herself because of her duties.

Depressed and perplexed—-At first, Florence was really disappointed and blaming herself to the loss of many soldiers. She believed that she could’ve done better. Because of her devotion to her work, she was able to forget that God was even in her side.

She questioned the Lord—-True to her calling, Florence dedicated her life to service. However, trials tested her faith to her Lord. She questioned God for forsaking her. Yet she managed to reconcile with the Lord, and surrender all her trust and faith to the One who called her on service.

What are the contributions of Florence Nightingale to Nursing Education?

She tried her best to apply what she learned from the nursing school. Though some physicians are still hesitant to the skills of nurses, yet she proved that they too are professional and equipped with the skills to manage patient care.

The very first requirement in a hospital is that it should do the sick no harm.

Her writings—-Florence Nightingale revolutionized the world of nursing through her writings and private journals. Through her articles she was able to create a worldwide health care reform. Her notable works were: Notes on Nursing, Efficiency and Hospital Administration of the British Army, and Notes on the Hospitals.

Statistics and research—- To understand God’s thoughts one must study statistics… the measure of his purpose. She relied to mathematics and science in order to evaluate the effectiveness of their nursing care. She did not gauge the results of their work merely through personal opinions and empirical judgment.

My only struggle is how to escape to a life poisoning me with vanity and social expectations.

She established that nursing profession should not only consist of emotional and physical care, but rather nursing should be practice with science and reliable studies. In 1858, she was chosen by the Royal Statistical Society as the pioneer in the graphic display of statistics. Also she given an honorary membership in the American Statistical Association during her time.

Quality nursing—-The very first requirement in a hospital is that it should do the sick no harm. Nightingale studied in her early beginnings how to improve nursing care. She knew that changing the linens, feeding the patients, bathing the sick were not enough to improve the health of the soldiers.

She described the military hospital as hell to the injured soldiers. Instead of catering their health needs, the hospital turned to be their last terminal before they die. For that reason, she sought for royal commission. She sought help for the supplies of the hospital. She knew that the government should be involved to improve the health care services of the military hospital.

Humble beginnings—- So never lose an opportunity of urging a practical beginning, however small, for it is wonderful how often in such matters the mustard-seed germinates and roots itself.

Florence Nightingale knew that in the pursuit for success one should start in a humble beginning. Though the act may be small at first, but surely with pure devotion and commitment to thy pursuit, surely it will generate big success in the future.

Like in nursing education: before a nurse is dispensed to a real world of nursing practice, one should start in the nursing school, nurtured with quality education.  A student nurse should be developed before entering to science of patient care.

Glorious end— Florence Nightingale died at the age of 90 on August 13, 1910. However in her lifetime, she was the first woman to gain the Order of Merit and Royal Red Cross by Queen Victoria of Great Britain.

Her contributions, writings and researches became known across the globe. For this reason, her birthday was also known as the International Nurses Day celebration which all of us nurses are celebrating.

In conclusion, Florence Nightingale had her own strengths and weaknesses like a normal individual. She was capable of mistakes and downfalls. She had a lot of challenges to conquer during that Crimean war however, her heart for nursing never wavered during those critical times when humanity needed a heroine the most.

Like Florence Nightingale, each of us is capable of doing something great for humanity. It only takes courage and perseverance to do what is right.

Happy birthday Florence! And happy International Nurse’s Day to all nurses out there!

10 Best Practices on How to Produce an Accurate Nursing Documentation