Warning: You might be overwhelmed by this topic. It might cause epistaxis to some but don’t get me wrong, theoretical foundations in nursing were taught to us during our freshmen year. Thus, it is only a go- over for nursing professionals. 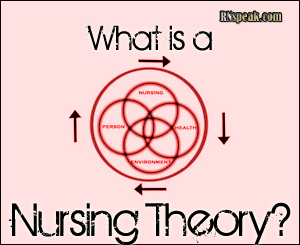 To start with, a theory is defined as an organized system of ideas that is intended to explain a set of facts, events, or phenomena. It is further described by Mosby (2006), as an abstract statement formulated to predict, explain, or describe the relationships among concepts, constructs, or events. It is tested by observation and research using a factual data. Every professional discipline has its guideline for its practice. Theories served as foundations and role models which paved its way for uncovering research as a valuable tool in the expansion of every discipline.

To give you more of its pictographic explanation, here is a diagram about theory:

The evolution of our profession has taken its grasps from the sophisticated theories of historical personas in nursing. It was not until that rationalism and empiricism were taken into account by Florence Nightingale to prove that indeed, nursing is both a science and an art.

Nevertheless, not only researchers in the world of science have the prerequisite to formulate and prove the interrelationship of concepts. Nursing care as an evidenced-based health care intervention is also based on principles that affect its education, profession, and practice. Thus, a nursing theory provides direction to what nursing care is effective and ideal.

It is described by Meleis (1991) as an articulated and communicated conceptualization of invented or discovered reality in or pertaining to nursing for the purpose of describing, explaining, predicting or prescribing nursing care. The concepts that nursing has tried and successfully infused in nursing theories are: (a) person- which refers to the recipient of care, (b) environment- which pertains to the external and internal factors influencing the person, (c) health- corresponding to the holistic level of wellness of the person, and (d) nursing- known as the caring interventions that the nurse provide to the person. These concepts can be found in the metaparadigm for nursing.

So, in short, a nursing theory could be realized in this diagram:

Moreover, the development of prominent nursing theories has been adequately purposeful in various settings of practice. These involve nursing education, research and clinical practice.

In Nursing Education, the theories in nursing have paved its way in introducing the framework for nursing curriculum, program objectives, course objectives and descriptions, and clinical performance criteria. Empirical knowing described as the principal form of relating factual and descriptive knowing usually found in textbooks, journals and lectures; is also one of its beneficial influences in education. It drives the foundations in nursing to its core explanations of scientific and evidence-based practice.

Other pillars of knowing such as aesthetic knowing, referring to understanding the uniqueness of every client in the provision of nursing care; ethical knowing, pertaining to what is morally right and good for the client; and personal knowing, which encompasses the knowledge of self in relation to others- are essential avenues in the realization of the importance of nursing theories which was reiterated by Carper (1978) and (Smith, 1992; Sweeney, 1994).

In Research, according to Henderson, “No profession, occupation or industry in this age can evaluate adequately or improve its practice without research”. Nursing theories can help generate new ideas, research problems and perspectives. Furthermore, nursing science as a melting pot for its practice can broaden its professional discipline through research. Considering that we are embracing the new era in nursing which is evidenced-based practice, pursuing nursing research efficiently reflects its high hopes for progress.

And lastly, in Clinical Nursing Practice, on the other hand, speaks of its ethical, moral, and scientific approaches in nursing care. A nursing theory for instance, of Florence Nightingale, describes the common sense of providing service in its most discreet ways while having an impact on the client’s health. It similarly describes how we impose and include such a plan of care to our client- not to our knowledge that it is actually based on nursing theories.

Sometimes, we are just surprised that how we deal with our clients is guided by provisions of care i.e. promoting comfort, interpersonal relationships, and caring are actually based on principles of nursing theorists. It may be at first strange to our scrutinizing minds but by knowing what a nursing theory is, best explains what we are truly are- a NURSE.

American Nurse Theorists and their Theories that Advanced Nursing Practice

Nursing Education – An Application of Andragogy of Learning