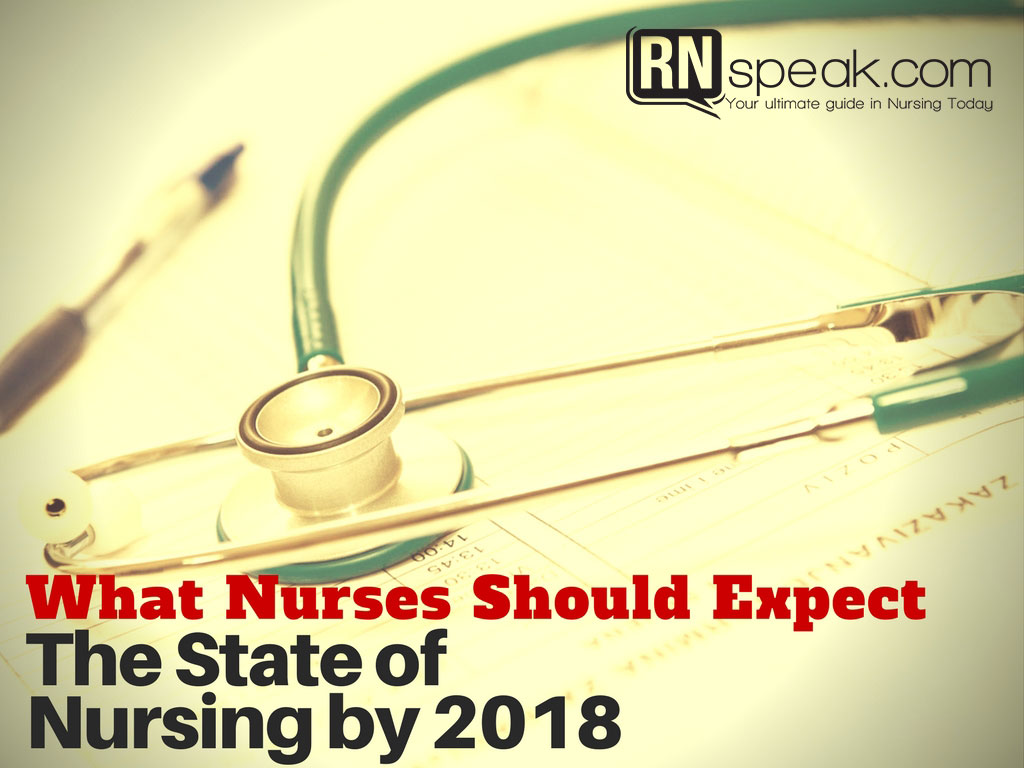 As a nurse, it’s important to stay updated with the general state of nursing and know what to expect for the coming year.

Nurses are Overworked and Underpaid

Indeed, nurses play a critical role in healthcare. Sadly, the real extent of what nurses do tend to go over everyone’s head. Yes, registered nurses are the ones who provide direct patient care. But aside from that, they also observe, assess, record vital health information, and coordinate treatment with the doctor and other healthcare professionals.

Nurses’ duties require long hours and are understandably physically taxing, as most nurses go through 12- hour shifts. We don’t only bring a vast amount of specialized knowledge to the table, but most importantly, we provide comfort and stability to patients.

The majority of these work environments put us at constant risk of infection, radiation, accidental needle sticks, hazardous chemicals, to name a few. Aside from directly attending to patients who may have some type of contagious disease, we also often come into contact with harmful drugs and chemicals.

Despite this hazardous work setting, nurses in a number of countries are comparably paid less. Countries such as Kenya, the Philippines, and the UK have nurses clamoring for being overworked and underpaid.

In Kenya, nurses are being given twice the workload. Even in the US, it is not unusual for one nurse to be asked to do the job of 3 full-time nurses. Similarly, in the Philippines, a nurse would be forced to stay on duty longer than the legally mandated eight hours, because the hospital lacks nurses. Earlier this year, two thousand nurses from all over the UK gathered in Westminster to protest against the 14% real-terms cut in wages.

This news is disheartening, considering the dedication and hard work we do. More often than not, we go above and beyond your duties for your patients.

Doctors prescribe treatment, but it’s the nurses who administer the drug. Doctors operate, but it is we who give critical post-surgery care. Hence, if a hospital is short of nurses, it’s the capability to properly take care of patients may be compromised.

What is more alarming is that the WHO has recently reported that the world is facing an international nurse shortage.

The World Health Organization reports that 48% of its member states have less than 3 nurses per 1,000 people. In most countries, nurses and midwives make up more than 50% of the national health workforce. Despite this, there is currently a 9 million shortage of nurses worldwide.

Although the shortage is estimated to be reduced to 7.6 million for most of the world, the shortage in the African and Eastern Mediterranean Regions is expected to worsen.

In fact, in WHO’s list of top 10 countries in dire need of nurses, most of these countries are made up of African and Eastern Mediterranean nations. For the purpose of brevity, we will only list the top 5 just to show the extent of the global nurse inadequacy.

5. Burundi
Being one of the world’s poorest countries, Burundi has seen many civil upheavals. Located in sub-Saharan Africa, the country is an epicenter of refugee migration. WHO estimates that there are 176 nurses per 1000 people.

4. Chile
Although Chile has been a leading health system innovator in Latin America throughout the 20th century, the country’s public and private healthcare systems lagged in terms of the necessary modernizations after the reinstatement of democracy. Currently, Chile has 145 nurses per 1000 people. Additionally, health care workers usually live in the urban areas, leaving a good chunk of the population underserved.

3. Niger
Not to be confused with Nigeria, the Niger only has 150,000 nurses in the entire country. WHO estimates there are 14 nurses per 1000 people. The shortage of qualified nurses presented a threat for the containment effort of the recent Ebola outbreak. The shortage is made more apparent when patients are forced to wake up before the sun rises in order to queue at hospitals or clinics.

2. Haiti
Haiti has been taking the brunt of natural disasters in recent years. The 2010 earthquake devastated the country, including a nursing school full of 100 nursing students.  Presently, there are only 101 nurses per 1000 people, with a ratio of 1 nurse per 18 patients in the ICU.

1. Somalia
Ongoing civil unrest has forced two-thirds of the local healthcare providers to feel the country, leaving Somalia with an alarming nurse-to-people ratio of 078 per 1000. Aside from the Somali Civil War, the country is also plagued by severe famine and drought, making healthcare even more critically needed.

Other Countries Experiencing a Shortage of Nurses

Indeed half of the globe does not have an adequate number of nurses. Although WHO’s list did not include western countries, the United States and the United Kingdom have expressed concern over the alarming rise of nurse vacancies in their respective countries.

The Bureau of Labor Statistics forecasted that 1.2 million vacancies will emerge for registered nurses between 2014 and 2022. The increase is primarily due to the demand for healthcare services from the aging baby boomer population; increasing emphasis on preventative care, and the growing rates of chronic conditions.

In England alone, UK is facing a shortage of 40,000 nurses and 3,500 midwives due to the pay cap and workplace pressures. The latest reports show that UK’s National Health Service’s staff vacancies have risen by more than 10 percent in the last year, with more than thousands of posts left unfilled. The severity of the situation has led the. The UK to lower the minimum grade for its International English Language Testing System hopes to attract and accept immigrant nurses to fill in the vacancies.

Meanwhile, in the Philippines, Labor Attaché Joan Lavilla said that Filipino nurses are in demand now more than ever. The Atlantic reports that by 2025, the shortfall is expected to be more than twice as large as any nurse shortage experienced since the introduction of Medicare and Medicaid in the mid-1960s.

Lavilla specified in an interview with Interaksyon that nurses will be needed in the fields of cardiology, critical care, cardiac surgery, cardiothoracic, coronary care, and cardiac catheter labs.

However, it is not only the Philippines that is eager to send their nurses to countries with high demand. There is healthy competition from other Asian countries as well, such as Sri Lanka and India.

As the demand for nursing is projected to shoot in the following years, it would be wise for governments to review and constantly monitor educational standards provided to nurses. Since nurses’ working environment is already hazardous in the first place, governments should help in making hospitals and other health care facilities safer, more therapeutic, and less toxic for its staff. For nurses to better care for their patients, it is paramount that the government take their welfare seriously as well.

Nurses are underrated, underpaid, and greatly underappreciated. We put doctors on pedestals, yet we don’t give as high regard to the nurses whose work is fundamental in any healthcare setting.

Governments, healthcare workers, patients, and individuals need to be made aware of the plight of nurses. Together, we can elevate the nursing profession to encourage people to take up nursing and give the profession more importance.

Materials and statistics are limited with regard to this topic, but feel free to share your own personal experience and opinion about how we can elevate the state of nursing in the coming year.