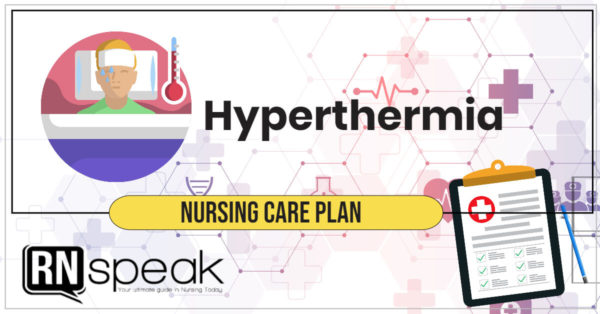 Hyperthermia or commonly known as fever is present when the body temperature is higher than 37ᴼC which can be measured orally, but 37.7ᴼC if measured per rectum. Due to recent events, acquiring contactless temperature is advised using infrared temperature taking devices such as Thermoscan or Thermoflash.

It occurs when the body is invaded by some bacteria, viruses, or parasites. Sometimes the occurrence of fever may also be due to non- infectious factors like injury, heat stroke or dehydration. Some medication also causes drug-induced hyperthermia such as Ephedrine, Sulfa Drugs, Interferons, etc.

Some underlying conditions can also cause hyperthermia, like thyrotoxicosis, heart attack and other forms of cancer. If not treated properly, a client may be at risk for its complications involving febrile convulsions, happening mostly to pediatric clients aging from 6 months to 6 years of age, and brain damage; which could be because of prolonged and repeated febrile convulsions.

In a video posted by Alila Medica lMedia, a simplified explanation of the physiology of temperature control was discussed. They also mentioned in the said video the different causes of hyperthermia as mention previously in this article.

“I am not feeling well right now. My head is aching and burning as if the steam comes out of my ears periodically.”

Client will be able to resume and maintain normal body temperature after 4 hours.

Client will be free from complications such as irreversible brain or neurologic damage.

Client will be able to report and show manifestations that fever is relieved or controlled through verbatim, temperature of 36.8ᴼC per axilla, respiratory rate of 12- 18 breaths per minute, pulse rate of 60- 75 beats per minute, stable blood pressure, absence of muscular rigidity/ chills and profuse diaphoresis after 4 hours of nursing care.

Client will be free from febrile convulsions resulting to brain damage after 1 week of nursing care.